Office bullying is harming workers across all demographics

A ​new study from CareerBuilder shows that bullying is alive and well in offices across America.

Most people probably think of bullies as perpetually angry teens demanding lunch money and delivering swirlies. But playgrounds and school hallways aren’t the only places where aggressive behavior, threats, gossip, and exclusion are used to victimize people and assert power. A  new study from CareerBuilder shows that bullying is alive and well in offices across America.

The study, which included more than 3,300 employees across industries and company sizes, shows that 28 percent of employees say they’ve felt bullied at the office at some point in their career, and of those employees, 19 percent said the bullying caused them to leave their job.

Who are the victims?
Overall, women are more likely to have felt bullied, with 34 percent saying they’ve been victim to workplace bullying at some point in their career compared to 22 percent of men.

Additionally, 30 percent of lesbian, gay, bisexual and transgender (LGBT) workers reported being the victims of bullying at work, along with 44 percent of physically disabled workers. 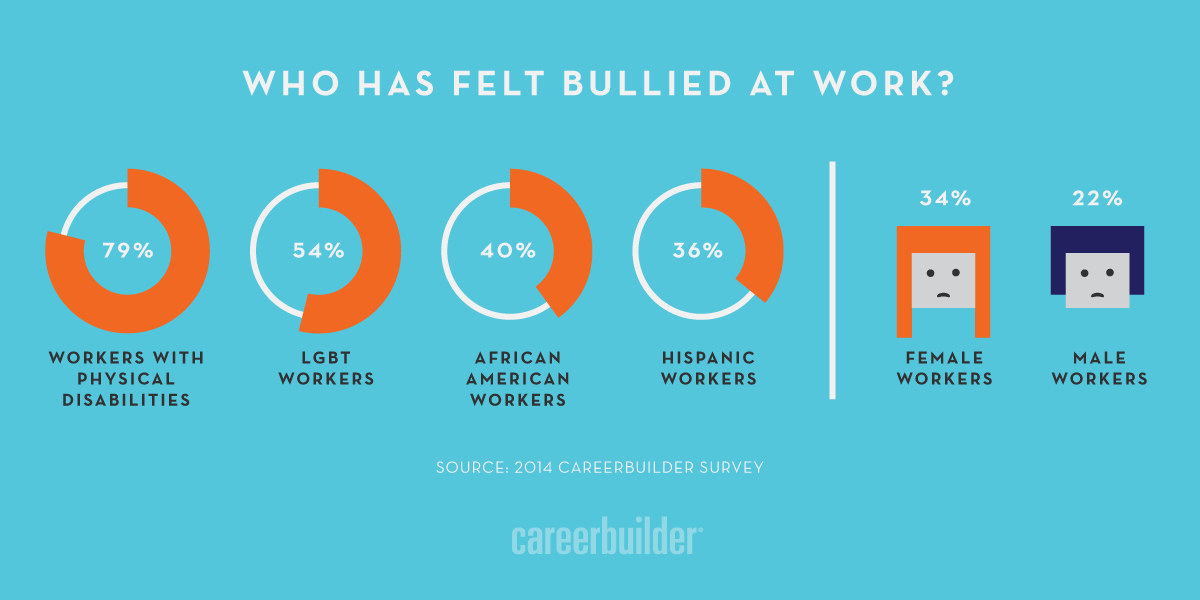 The study also found that 27 percent of African American workers and 25 percent of Hispanic workers have felt bullied on the job, compared to 24 percent of Caucasian males.

“One of the most surprising takeaways from the study was that bullying impacts workers of all backgrounds regardless of race, education, income and level of authority within an organization,” said Rosemary Haefner, vice president of human resources at CareerBuilder.

Bullying, past and present
While run-ins with their bully are in the past for many of these workers, 24 percent of those who reported feeling bullied at work say that it is currently happening in their present job, and 19 percent ended up leaving their job as a result of bullying.

The study also broke the numbers down further, taking a closer look at workers who said they are currently being bullied by job level, educational attainment and compensation level:

Who are the bullies?
Forty-five percent of bullied workers said the boss was the main culprit, while 25 percent pointed to someone higher up in the organization, but not the boss, and 46 percent said they were bullied by a co-worker. 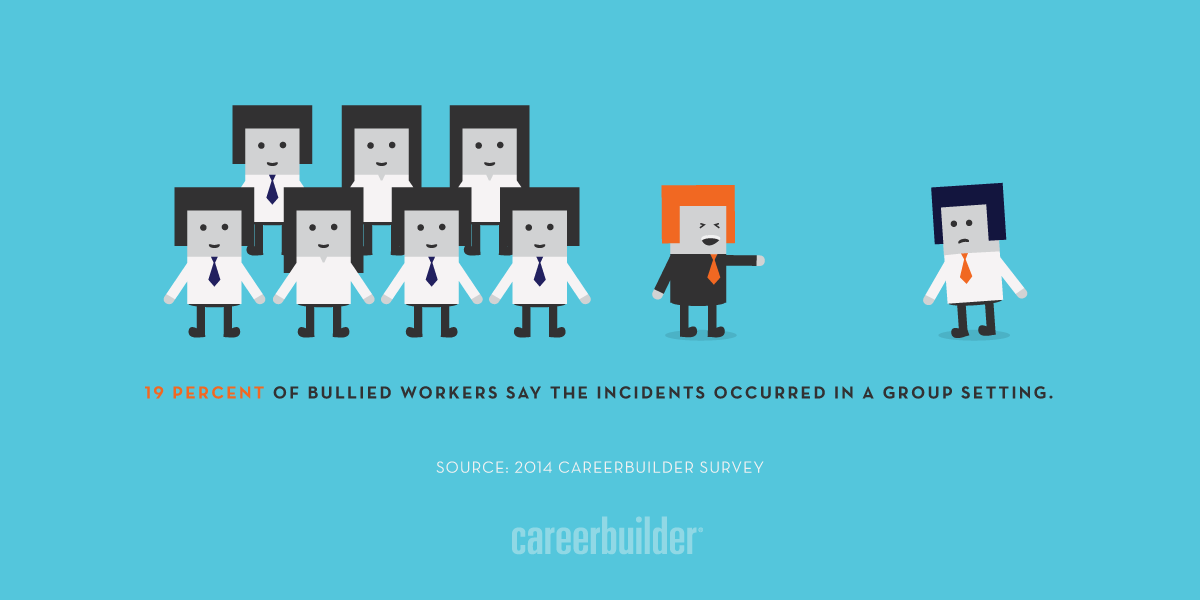 Types of bullying
Bullying in the office can look very different from bullying on the playground. While physical violence or name-calling aren’t as prevalent, the most common ways people reported being bullied at work include: 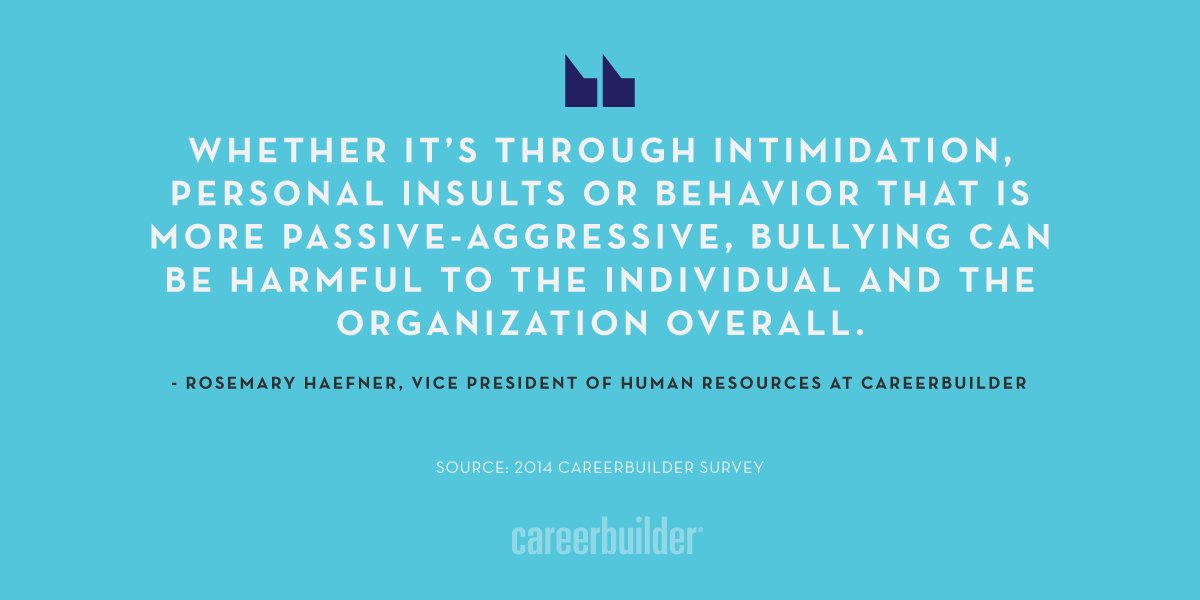 32 percent said they reported the bullying to their Human Resources department, but more than half of those who did (58 percent) said no action was taken.

Haefner stressed that taking no action and allowing a bully to continue can, in some cases, just make the problem worse. “Many of the workers who have experienced this don’t confront the bully or elect not to report the incidents, which can prolong a negative work experience that leads some to leave their jobs.” 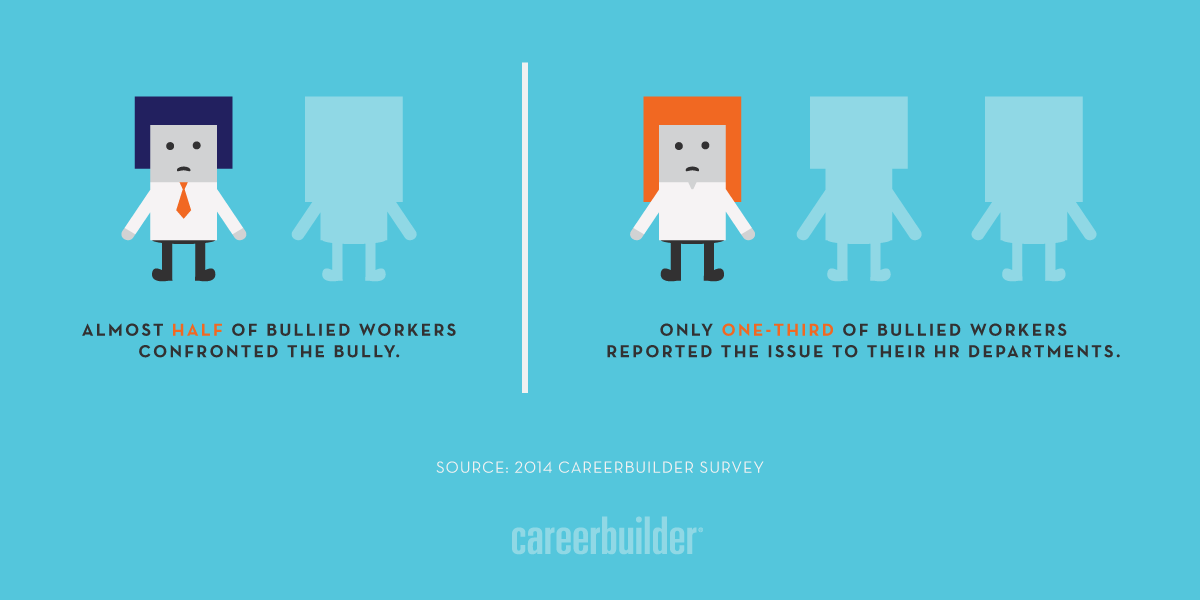 Tips for dealing with a bully
For workers who are feeling bullied by someone at their office, Haefner offers the following tips to deal with the situation:

6 tips for dealing with the office bully