Could your city survive a zombie apocalypse? 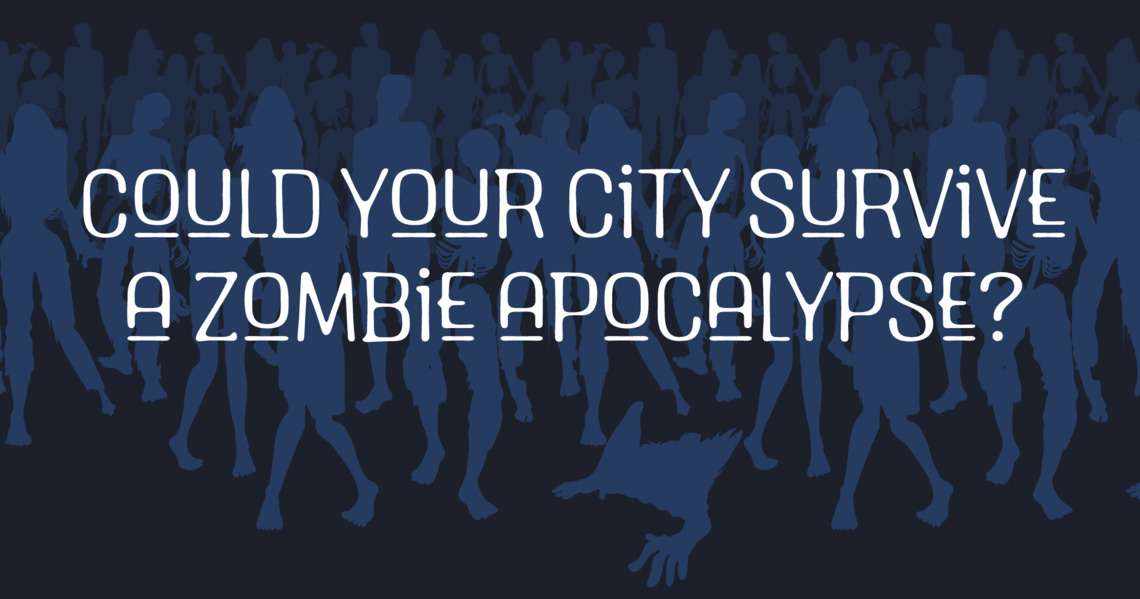 There's one factor many people overlook when considering their odds in a world overrun with reanimated corpses - where you live.

With more and more movies and TV shows debuting every year about reanimated corpses rising from the grave to attack the living, zombies are a horror staple that – pardon the pun – just won't stay dead.

In light of that, and in the spirit of Halloween, CareerBuilder and EMSI decided to take a look at which major U.S. cities have the best odds of surviving the zombie apocalypse. By weighing the pros and cons of each city's economic make up, the Zombie Apocalypse Index offers a glimpse at which cities have the best chances to save the human race, and which ones would be conquered by the undead.

The brains behind the index

Each metro's survival score is reached by weighing 8 factors in 4 different categories – Defense, Containment, Cure and Food. An overall score of 100 represents the highest possible likelihood of riding out the hordes of walking dead, while lower scores indicate greater chances of becoming zombie fodder.

Occupational and industry data was sourced from EMSI and Census Bureau Data. Standard, flesh easting virus, transmitted via biting or contact with infected blood assumed. This is scientific and completely accurate, obviously.

DEFENSE
There's only one way to stop a horde of zombies, and it isn't diplomacy. That's why cities with a high percentage of their population in military and protective services (e.g. law enforcement, firefighting and security) jobs stand a better chance of holding off the zombie assault.

To account for the availability of firearms, this score also takes the percentage of total exports coming from the metro's small arms manufacturing industries.


CONTAINMENT
To understand a city's ability to build effective zombie-proof walls and rebuild society from the wreckage, this score is based on the availability of skilled engineers and construction workers. Population weight density was also factored in – if the walls are breached, the infection will spread faster in cities with a high PWD.


CURE
Guns and walls can help keep the zombies at bay, but the zombies are really just a symptom of the real problem. The best bet for long-term survival is learning what is causing the zombie outbreak and developing a cure or inoculation. Metros with high densities of biomedical research and development employees and facilities stand a better chance of stopping this madness at the source.


FOOD SUPPLY
How well a city can hold out against a siege – zombies or otherwise – often comes down to how long they can continue to feed their population. To determine this, CareerBuilder looked at each city's exports of non-perishable food manufacturing or wholesale goods industries. These include rice milling, breakfast cereal manufacturing, fruit and vegetable canning, roasted nuts and peanut butter manufacturing.

Availability of clean/fresh water, however, presented numerous additional variables, and therefore was held constant across all cities.

MOST LIKELY TO SURVIVE

Representing America's best hope for finding a zombie cure, and boasting considerable scores in both Defense and Containment, Boston tops the list of the cities most likely to survive the zombie apocalypse, with a total score of 43.99 out of 100 possible points.

While New York has survived any number of horror, sci-fi and natural disasters in movies and TV shows, it's actually not the best place to be during a zombie apocalypse. New York's high population density and limited food supply contribute to its place as the least likely of all major U.S. metros to survive an invasion of reanimated, brain-hungry corpses.

Know your worth as an RN

Keep your vacation from becoming a ‘work-ation’